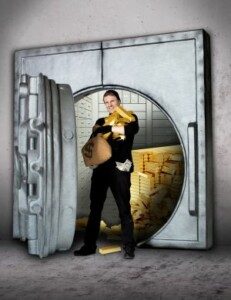 Myself and my two teenage sons took ourselves off to the theatre this month to see The Mischief Theatre Company’s production of The Comedy About a Bank Robbery at the Criterion theatre, built beneath the hustle and bustle of London’s famous Piccadilly Circus.

It was a hot and humid Saturday night and the streets were packed to the gills with people enjoying the outside entertainers and caricature artists.

Within 30 seconds of the curtain going up the three of us were in fits of giggles. The comedy was so, so silly and made no sense but what a joy it was to laugh out loud whilst the mad, mad world rushed by outside the theatre doors.

Pure slap-stick in the vain of One Man, Two Guv’nors, it totally appealed to my sons – my fifteen year old likened it to TV’s Family Guy humour.

The Mischief Theatre Company is enjoying great success in the West End with three successful productions including this one, The Play That Went Wrong and Peter Pan Goes Wrong (the latter returning to the theatre for Christmas) keeping the smile on theatre-goers faces .