Home > Simon in London > Theatre Review: As You Like It – Savill Gardens

I don’t think that it is too unfair to say that the star of Watch Your Head’s promenade production of Shakespeare’s As You Like It, is the majestic Savill Garden itself. Part of the Great Park at Windsor and sympathetically lit in the golden glow of an English sunset, it is perfectly cast as the Forest of Arden.

Whilst the play (directed by Sasha McMurray, co-founder of Watch You Head) begins and ends on the terrace of the visitors centre, the majority of the scenes are set in the gardens, with the audience being led, ever-deeper, in to the forest, as we follow the action. 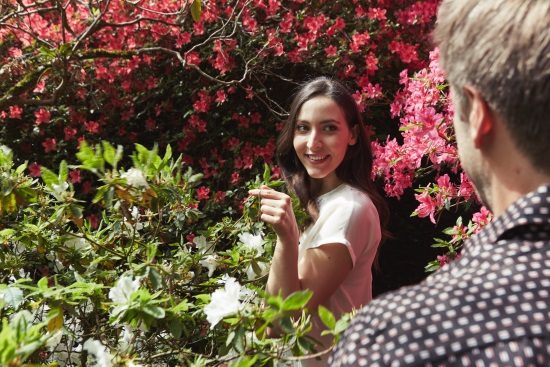 The small, multi-talented cast are very much at home in the formal grounds. It is a delight to watch them, not only when they are part of the main scene in front of us, but also to catch glimpses of them around the garden. Celia perched on a log, sat at our feet or leaning out over a formal rose garden; Orlando deep in thought, sitting at the base of a tree or reclining in a rustic arbour; or Duke Seniors court in post-carousal decline, recumbent across verdant lawns.

Last night, as we approach the play’s conclusion, we found ourselves beneath the boughs of a particularly fine tree, watching Orlando tell “Ganymede” that his love for Rosalind can no longer be satisfied by talk alone. However, throughout the scene a perfectly timed entrance was being prepared, as we became aware of Phebe, trailed by Silvius, deep in an animated argument, walking up a beautifully manicured path towards us, to arrive perfectly on cue. I have known many actors who fail to get an entrance right from 15 feet away: this must have been a good 70 yards!

Harmony with the surroundings is also achieved in the music, written by Bruno Major and played by the cast themselves. From the first melancholic gypsy strains from the violin of Oliver Grant (a lovely Touchstone), to the French, gypsy/jazz of Blow Blow Winter Wind (think Django Reinhardt’s Swing Gitan) the music provides perfect aural highlights just as the beautifully dressed cast, like perfectly planted flowers, provide the visual ones.

Watch Your Head are a mixed bunch of performers. Aerial skills are combined with dance, music and song to help present the action. Whilst there are those with obvious strengths in some of those areas, Jack Bennell (Jacques) seems to be one who is most at ease with both the Shakespearean and the physical nature of the production. A part blessed with none of the action but most of the best lines, Bennell also bring a physical comedy to the role and easily strikes up an excellent rapport with the audience.

Anna Lukis is a fresh, wide-eyed, Rosalind full of the naivety of love-struck youth. She is at her most entertaining when, banished, she decides that, in an attempt to travel safely through the forest, she should pretend to be a boy, which she does in a charmingly, terrible, fashion.

Molly Hanson is delightful as quick-witted Celia. Exiled, by choice, to follow Rosalind into the forest, she takes on the roll of Aliena, making for a beautiful, petulant garden fairy as she becomes accomplice to the tricks that her friend plays on Orlando.

Lewis Goody’s Orlando, at once a love-lorn, poetry-writing, aesthete and then a lion-wrestling woodsman, was rather hampered by an arm in a sling last night but, despite this, manages to pull off the breadth of the role with gentle good-naturedness. He will be lovely to watch when he is less encumbered.

The physical side of the production is primarily provided by Luke Chadwick-Jones as Charles/Silvius, Jose Beth Davies as Phebe and Jonah Russell as Corin. Their acrobatic prowess is as impressive when they are flying across the floor, as when they are suspended from trees, high above us, with a mixture of dance and circus skills, intricately choreographed by Thomas Michael Voss.

Mark Carlisle is as affable a Duke Senior as he is an irascible Duke Frederick and the whole banished court, when we come across them in a wooded glade, are an enjoyably merry bunch.

On the night that I saw the play, it was here, however, that we started to get bothered by midges. The planes from Heathrow had been a constant irritant, but there is something about promenade productions that turn audiences, who in the dark cannot abide even the most minor of distractions, to as stoic a bunch of people as you are ever likely to meet and we met the challenges with a quick waft of a programme and a swig of whatever we had ordered at the bar!

The final scenes are completed back at the terrace and we returned to find fairylights and a wedding breakfast (for those who pre-ordered).

With a flourish, the final bits of the story are dealt with and the wedding speeches signal the end of the story and we are left to enjoy the food, the drink, more aerial displays by the amazing Josie Beth Davies and the ensemble, accompanying Amiens (beautifully sung by Rose Riley), in an encore of Blow Blow.

The perfect end to a perfect evening.