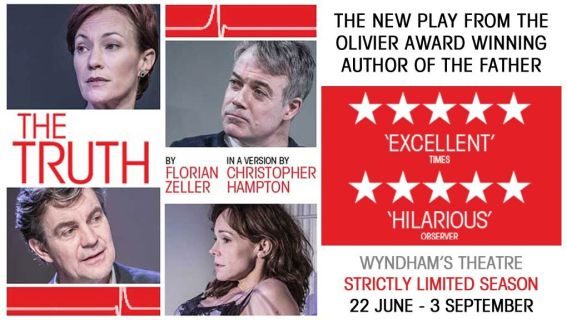 After his recent phenomenal success in London with The Father (for which actor Kenneth Cranham won a 2016 Olivier award) French playwright Zeller brings his biting comedy The Truth to the West End this summer following critical acclaimed performances at the Menier Chocolate Factory.

Through the eyes of two couples : friendship, suspicion, deceit and, ultimately, The Truth.

Once more with a script translated by Christopher Hampton (The Father) and directed by Lindsay Posner (The End of Longing, The Winslow Boy) The Truth focuses on businessman Michel’s affair with Alice who is married to his best friend, Paul. As the affair builds momentum, Alice begins to demand more and more of the relationship which in turn brings unforeseen consequences for Michel’s extramarital temptations.

In the past, Zeller’s plays have proven huge hits with regional and London audiences alike and The Truth promises to be equally lauded.