Ilissos presents Hamlet at the Cockpit

Over 400 years and still fresh! 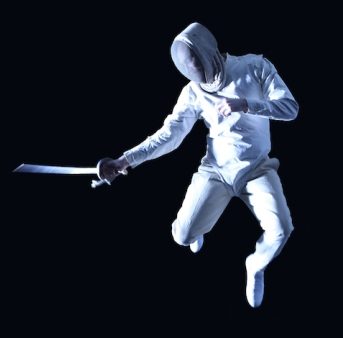 It won’t feature on a Theatre Break itinerary any time soon, for a start the run is too short and, whilst the music is not your run-of-the-mill 16th century court music, it’s certainly not Jersey Boys, but this short and punchy version of William Shakespeare’s Hamlet made for an excellent reason to travel to the big smoke this month.

So this is supposed to be the first text of Hamlet, but it had more the feel of a later version, sketchily remembered: successfully keeping the story of the original if not the finesse that made it memorable in the first place.

Imagine if you will a group of enthusiastic youngsters re-enacting Hunger Games as they return home from the cinema. Everything is there… sort of! Still, this is not what is important: whatever the provenance of the words, the play is the thing!

First on are three rostra that, gater-legged, mimick the cast with their multiple roles: at times functional, at other times more metaphysical. With effective lighting they stand sentry to the action as it unfolds around, on top and underneath them. The simplicity keeps the show moving at a cracking pace, although the “rostra ballet” at the end of act one did little more than delay our exit to the bar!

This version of the play (or was it the production?) makes it much clearer that Hamlet’s madness is a contrivance. So with that decision taken away from him, Nicholas Limm’s Hamlet, becomes a much less complicated character. In fact it is all less complicated.

Hamlet’s relationships suffer most – most notably with Gertred and Ofelia. He barely talks to Gertred who is reduced to the role of bystander and, when Ofelia and he do talk, it is nothing more than mealy-mouthed sniping. Maryam Grace’s Ofelia shares Hamlet’s naive outlook on the world but she fails to convey the brittle nature with which her descent into madness would more happily sit.

Ben Woodhall and Sam Jenkins-Shaw are suitable Roz and Gils adding a little humour to the proceedings as they dumbly do the King’s bidding.

The part that we would know as Polonius, but in this working is called Corambis, is played by John Hyatt. A decision was made at some point to make the foolish old man an Alzheimer sufferer who would simply lapse into silence half way through a speech. I can’t tell you what this did to the script. Was his part so unintelligible that they felt that this was the only course of action or were his ramblings the creation of a more recent editor? I would really like to know, although not knowing did not spoil my enjoyment of the piece.

The simplicity of the piece helps Leartes (Sam Jenkins-Shaw) who basically disappears at the beginning to return cross but honest and easily manipulated by the king. Not much to hang a character onto but thank goodness there were some rostra to move!

Unlike the ladies, whose names are only slightly different to those we know today, the character of the poisonous king is not even given a name in this version and that seemed to be taken as a cue to underplay him out of existence. With the cast doubling up, Alex Scrivens landed the dual roles of the royal brothers. Unfortunately the living one was hardly more animated than the dead. Nothing wrong with that but at no time did I worry that we were in the presence of a dangerous man.

It always seems right to come to Horatio last. There he is left at the end with a room full of bodies trying to explain what has just happened to some rather bemused Norwegians. Christopher Laishley balances the role perfectly but, interestingly, as Hamlet is patently not mad, rather than fearful bemusement, he follows the prince around with a sort of quite patience. The final effect is actually quite similar and the shock of his loss and the unexpected escalation, at the end, is just as heart-rending, but it seems to come from a new direction.

This is all part and parcel of the freshness that this production/this script gives to the play. I didn’t mind that much of the poetry is removed… it’s nice to know that the actors do not have to suffer to foreboding that comes with knowing that in a minute you are going to have to say “Whether it is nobler in the mind to suffer the slings and arrows of outrageous fortune”. And it must be a joy to be able to utter what we are all surely thinking: “What a dunghill I am“

All in all I think I was happy with the paired down version. It’s not exactly Shakespeare, but the fact that we were on our way home before 10pm left me with the feeling that maybe Shakespeare can tend to go on a bit if left un-checked.

It’s not a perfect portrait of one of literature’s most enigmatic characters, but it was a good sketch and I quite liked it.