Hand To God Theatre Breaks are no longer available to book.
See what’s on next at the Vaudeville theatre 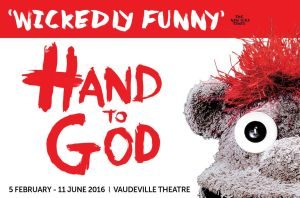 ost famous for playing nasty snivelling cousin Dudley Dursley in the Harry Potter films, actor Harry Melling is all grown up in the Broadway transfer of outrageous comedy Hand to God at the Vaudeville theatre.

The New York Times hailed this gleefully dark Broadway comedy about a boy and his potentially satanic hand puppet as “Wicked Funny” and the New Yorker called it “Sesame Street meets The Exorcist”.

The Tony Award nominated “thrill ride of a comedy” is set in a small Texas town where Tyrone the scene-stealing sprite comes to life expounding on everything from love to faith and proving that it is both sinfulness and saintliness that make us all truly human… and utterly alive.

Hotels close to the Theatre

Wander towards Holborn and the 4 star Kingsway Hall on Great Queen Street.

If you don’t want to stay nearby you can catch the underground form nearby Covent Garden and Charing Cross tube stations. You can walk across the Thames where hotels, on the south side of the river, are a bit cheaper. Take a moment to enjoy the beautiful views up and down the Thames as you cross the Thames – breathtaking when it is all lit up at night!