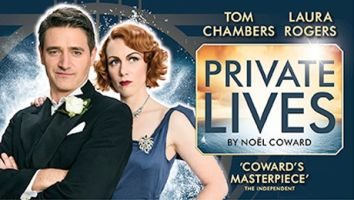 Hanging up his tap shoes for the next few months is former BBC’s Strictly Come Dancing winner Tom Chambers will play one half of warring divorced couple, Elyot, opposite Laura Rogers as his ex-wife Amanda in Noel Coward’s Private Lives.

Last seen in the West End in 2013, in the Chichester Festival production starring Toby Stephens and Anna Chancellor,  Elyot and Amanda are on their honeymoons with their respective new spouses – as “bad” luck would have it they’ve chosen exactly the same hotel in which to stay – in fact, their hotel rooms are next door to each other with the balconies almost touching! Not the best start to a new relationship.

Coward’s witty war-of-words comedy Private Lives will go on an extensive UK tour before coming into the West End in late Spring 2016 in a venue yet to be confirmed.