Home > Archive > Farinelli and the King

Theatre Breaks for Farinelli and the King in London are no longer available.
See what’s on next at the Duke of York’s theatre 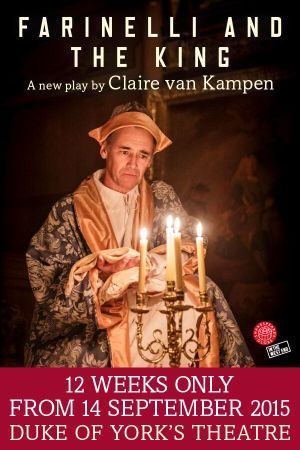 Lauded as ‘one of the greatest stage actors in the world’ , Mark Rylance reprises his role as King Philippe V of Spain having played to sold-out houses at Shakespeare’s Globe earlier in the year.

King Philippe V of Spain lies awake in his chamber unable to find solace in sleep. Queen Isabella in a desperate attempt to find a cure brings Farinelli – a castrato with a voice so divine it has the power to captivate all who hear it – to court.  When the King hears Farinelli sings he begs him to stay, but will Farinelli choose a life of solitude over fame and fortune? And will his extraordinary talent prove to be a curse rather than a blessing?

With Farinelli and the King Theatre Breaks guests can choose the on-stage seating area where you will have an up-close and personal experience in the transformed Duke of York’s Theatre. A magical atmosphere is created with scenes lit by candlelight and live Baroque music played by six onstage musicians.