Read our Tips for a London Stopover

Are you looking for something to do on a London layover or maybe you are still looking for a place to stop off on your travels this year?

If you are lucky enough to have a one night stopover in London or are just able to spend a few hours there, on your travels this summer, then take advantage of the opportunity with a side trip to London’s Theatreland.

Whether you are avoiding an evening in a faceless airport hotel or looking for somewhere to entertain the kids mid journey, the easy access (including excellent airport transfers to and from the UK’s capital) makes a night at one of London’s world famous musicals and long-running shows, the perfect way to spend a stopover in London.

All four London international airports have direct train or underground links to the capital’s centre which makes it easy to book a theatre break in London.

However, before you dive in, let us give you a heads up on travel and show options, depending on which airport you are arriving at.

The quickest way by far into central London is the Heathrow Express to Paddington station, but unfortunately Paddington isn’t close to any theatres. However, once you get there you could jump on the Bakerloo or Circle underground lines to Baker Street which will land you on the doorstep of Madame Tussauds and Regent’s Park Open Air Theatre (the latter being open May to September only).

If you want to get to the heart of the West End then you will need to catch the underground at Heathrow which is served by the Piccadilly line, but you should allow yourself at least 45 minutes to get into Theatreland.

The Piccadilly line stops at Piccadilly Circus, Leicester Square and Covent Garden station all of which have theatres a stones throw away from their exits,

At Piccadilly Circus, you will find the comedy The Play That Went Wrong at the Criterion Theatre

Around the corner from the Criterion is Haymarket where you’ll find two theatres : the first one you get to on the right hand side is the Theatre Royal Haymarket and Her Majesty’s theatre on the opposite side of the road where the “granddaddy of musicals” The Phantom of the Opera is now in its 30th year.

On the corner of Coventry Street and Leicester Square is the Prince of Wales theatre where The Book of Mormon will have you rolling in the aisles.

You can also walk to the Piccadillly, Gielgud, Apollo and Queens theatres from Piccadilly Circus. The latter is home to the phenomenon that is Les Miserables.

The next stop is Leicester Square where you are spoilt for choice with another eleven theatres being within walking distance, but the closest to the station are the Wyndham’s, the Garrick, Noel Coward and the Duke of York’s theatres. These four theatres often have limited season productions, but at time of writing the following shows can be seen…

Garrick : multi media tribute show to the fab four Let It Be which is booking to 6 th September 2015.

Noel Coward : a magic show for all the family Impossible, followed by Nicole Kidman starring in Photograph 51 from 15 th September to 21st November 2015

Duke of York’s : hosting two shows this summer… Until 1 st August 2015 there is Felicity Kendal and Simon Shepard starring in Noel Coward’s sharp witted farce Hay Fever and then from 3 rd August Hetty Feather moves in for the rest of the school holidays with child friendly-timed performances during the day and at weekends. 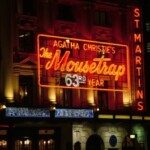 You also have The Mousetrap and Stomp plus the English National Opera all within walking distance of this station too.

One stop north is Covent Garden and again you can easily walk to a total of ten theatres from this station, but I’ll give you the heads up on the closest ones.

Covent Garden is home to the Royal Opera House – not only famous for the high notes and number of pirouettes their singing and dancing divas can achieve, but also for the astronomical price they charge for tickets. But if you sit up in ‘the gods’ you won’t have to pay a king’s ransom to experience one of the classic operas and the ballet? Well, you’ll be glad to hear is slightly cheaper. I think it is because dancers don’t eat as much as singers! 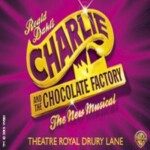 Fun for all the family can be found at the Theatre Royal Drury Lane (which is not actually in Drury Lane – go figure) and at the Lyceum theatre which are showing Charlie and the Chocolate Factory and Disney’s The Lion King respectively. For those that like to be scared then visit the Fortune theatre where The Woman in Black is still making audiences jump 26 years on from its first terrifying night. If jumping out of your seat with fright is not your thing, then you can find you inner dancing queen at the Novello theatre where feel-good Abba-tastic musical Mamma Mia is still packing them in eight performances a week.

Hotels are in abundance here, as you can image, but I can recommend the 4 star deluxe Radisson Blu Edwardian Mercer Street situated opposite the Cambridge theatre where Matilda is on; or for a no frills stop-over the 3 star Travelodge Covent Garden.

From Covent Garden the Piccadilly Line leaves Theatreland so do make sure you get off here otherwise you will end up in Cockfosters!

Transfers from Gatwick to central London can be taken on Thameslink trains or the Gatwick Express.

Using the Thameslink going north you can choose two destinations. The first being London Bridge where you can easily reach the world renown Shakespeare’s Globe on Bankside, Southwark. Here you will find an excellent season of The Bard’s work, which this summer includes As You Like It, Measure for Measure & Richard II, being produced in a thoroughly authentic Shakespearean setting. You can enjoy the experience from one of the wooden benches that surround the stage in thee “circles” or you can stand at the front with the peasants: dirt cheap and the perfect antidote for someone who has just spent 13 hours on a plane and is looking forward to another long journey the next day!

The Thameslink line runs all the way through London out to Luton International Airport, so if you are coming into the West End from that direction, you can disembark at St Pancras International train station and take the Piccadilly Line on the underground into the heart of Theatreland. For theatres that are easy to get to using the Piccadilly Line see Heathrow Airport section.

Your other option on Thameslink is to take a train via London Blackfriars station which is a cough and a spit away from the Playhouse theatre where you can see the The End of Longing.

Hotel options here are the 3 star Travelodge Waterloo or the Holiday Inn Southwark.

The Gatwick Express fast tracks its way to the hustle and bustle of Victoria Station where, some may argue, you need look no further for entertainment with two of London’s biggest musicals: Billy Elliot and Wicked. 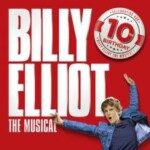 Billy Elliot, at the Victoria Palace theatre just opposite the train station, is the stage adaptation of the 2000 BAFTA winning film with lyrics by Sir Elton John. It’s the story of a young Northern lad who goes against his “working class roots” to become a dancer. It is currently booking to 19 th December 2015.

Across the road at the Victoria Apollo you can enter the “green” world of Wicked – the untold story of the two witches from The Wizard of Oz. Long before Dorothy’s fateful journey on the Yellow Brick Road, Glinda and Elphaba meet at the University of Oz, but their paths in the world of magic spiral in completely different directions. The music, costumes and stage sets are stunning. Choose this show if you have an early start as it’s the shorter of the two by 15 minutes!

Finally, if you arrive at Stansted you come directly into Liverpool Street to the east side of London. Here you can take the Central Line into the West End either alighting at Holborn station where you are able to walk to the Shaftesbury theatre; the New London Theatre and the Aldwych theatre – multi award winning Beautiful : The Carole King Story. One stop on from Holborn is Tottenham Court Road, above which, you will find, the Dominion theatre, where you can see Beverley Knight in the electrifying The Bodyguard

So next time you have a few hours to spare in London, think of taking in a show – let’s face it: you are spoilt for choice!