Well this month is a month and a half for London Theatre and Theatre breaks. So much so that I have not noticed a day when something in London’s Theatreland has not trended on Twitter!

It started off with the Olivier Awards, continued with announcements from Kenneth Brannagh, the Old Vic and Matthew Warchus and Kinky Boots and now Michael Grandage chips in with what could be considered as the best of the lot! 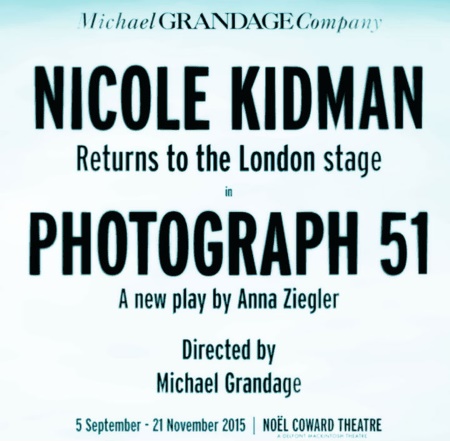 Nicole Kidman will return to the London theatre stage in September 2015 to play British scientist Rosalind Franklin in “Photograph 51” at the Noel Coward Theatre.

This is not Kidma’s West End debut – that was 17 years ago when Theatre Breaks audiences got to see her in The Blue Room, for which she was nominated for an Olivier (keep an eye out this time next year!).

The play, Photograph 51, is by Anna Ziegler and it tells the story of how Franklin’s use of X-ray diffraction images led to the discovery of DNA’s double helix structure in 1953.

Michael Grandage himself will direct “Photograph 51”, the production of which marks the return of his theatre company to London. It was last seen in Theatreland in 2014 when Jude Law starred in Henry V.