Is there anyone out there like me who, as a child, dreamed of being a successful actress on the West End stage?

I am very lucky to have fulfilled that dream as I was in two productions in London in the early 1990s – The BFG at the Aldwych theatre and The Witches at the Duke of York’s theatre. Suffice to say that the experience was absolutely the most thrilling thing I have EVER DONE IN MY LIFE. Oh, how I longed for those days of being a young 20 year old performing on stage night after night. But then a husband, mortgage and children over-took my theatrical aspirations.

So, today I was updating our websites with new cast members joining current West End shows and it got me thinking as I was reading about the 40th Billy joining the cast of fantastic musical Billy Elliot at the Apollo Victoria theatre that these kids are really living the dream… or at least living MY dream!

With the aforementioned Billy Elliot having five alternate Billys, three alternate Michaels and Debbies respectively plus a troupe of young ballerina’s strutting their stuff eight times a week in the West End is certainly not living up to the old saying of “never work with children or animals”. The on-stage rapport between Billy and his best friend Michael is spot-on and the actors who play the role of Billy are sensational ballet dancers and gymnasts. How uttering brilliant to be so good in a dance discipline at such a young age that you can pretty much hold a West End show together single-handedly. 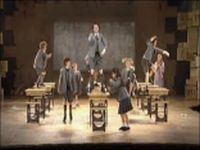 And Billy Elliot is not the only show that proves children can be the glue of the production. Just look at Matilda the Musical at the Cambridge theatre where, in its first year, the four young actresses who alternately played the lead role of Matilda all won Olivier Awards in the Best Actress category. Having seen the show three time myself, I can confidently say that the Matilda’s are the crème de la crème of child actors. But for those that know the Roald Dhal story, Matilda shares the stage with a rotation of 24 other children all who shine as her classmates – especially the young actors who play the chocolate cake eating Bruce.

At the Theatre Royal Drury Lane, not so new-kid-on-the-block Charlie and the Chocolate Factory boasts 16 children alternatively playing the parts of Charlie and the other four Golden Ticket winners some who don’t last very long in the show (I’m looking at you Augustus Gloop) and some who cling on for as long as they can before being taken off stage, kicking and screaming, by a pack of squirrels (yes, you Veruca Salt).

Long standing granddaddy of family shows – Disney’s the Lion King at the Lyceum theatre – has eight alternate actors playing the parts of young Simba and Nala – who have some great scenes together in the first half of the show. Of course, it’s Simba’s story so we do tend to see a lot more of him and all the times I’ve seen the show I’ve been very, very impressed with the actors who are usually no more than 12 years old.

So you see, it’s never too young to aspire to stardom and dream a dream … the London stage awaits!

Have a good weekend