Theatre Breaks for Lord of the Dance : Dangerous Games in London.
Are no longer available.

An epic new staging of his original masterpiece, Michael Flatley’s Lord of the Dance – Dangerous Games opened at the Playhouse theatre in October 2015. 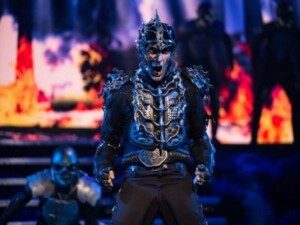 This remastered show promises to be another incredibly popular and triumphant production of the world-conquering phenomenon and an exciting highlight to a London Theatre Break.

A classic tale of Good vs Evil, a little spirit travels through time to help the Lord of the Dance challenge the power of the Dark Lord. Told through the medium of the most extraordinary dance performances, with stunning pyrotechnic effects and a hauntingly beautiful musical score, the show has touched people around the world since it first premiered at the Eurovision Song Contest held in Dublin in 1996.

Casting news : Over The Rainbow finalist Sophie Evans and The Voice UK’s Rachael O’Connor will alternate the role of Erin The Goddess when the show re-opens at the Playhouse theatre this Autumn.
Evans was runner up in the BBC talent show which found Dorothy for Andrew Lloyd Webber’s revamp version of The Wizard of Oz back in 2010. Danielle Lloyd ultimately got the public’s favourite, but Evans did get to slip into to sparkling red shoes when she took over the lead role at the London Palladium in 2012.
Fans of singing talent show The Voice will recognise Rachael O’Connor from series three where she was coached by Kylie Minogue.
They will join James Keegan and Morgan Comer alongside brothers Cathal and Fergal Keaney, who are all winners of multiple World Irish Dancing Championship titles and have been hand-picked by Michael Flatley himself.

I saw Lord of the Dance : Dangerous Games at the Dominion theatre last Thursday. It was the first time I had ever seen this type of show live and to say that I was gob-smacked would be a vast understatement.

The story is very simple. Good vs evil. You know who is going to triumph in the end, but that doesn't matter one jot.

As well as the phenomenal Irish dancing, the show is interspersed with a couple of songs and some nifty violin playing.

I must admit the I could have done without either of the above as the high-light was always going to be the fantastic solo dancing by James Keegan who played the Lord and the ensemble pieces which were incredibly choreographed.

I, as well as most of the audience I suspect, could have sat watched the incredible footwork for a whole 2 hours without any of the other bits pout in to give the dancers a well earned rest.

Well worth catching if you are in London this summer or see it on tour around the UK during 2015.