Home > Archive > Once in London

Once Theatre Breaks in London are no longer available. The next show at the Phoenix theatre is The Girls

Once is the smash-hit, award-winning musical that will capture your heart like no other. Book Once Theatre Breaks for a truly romantic short break 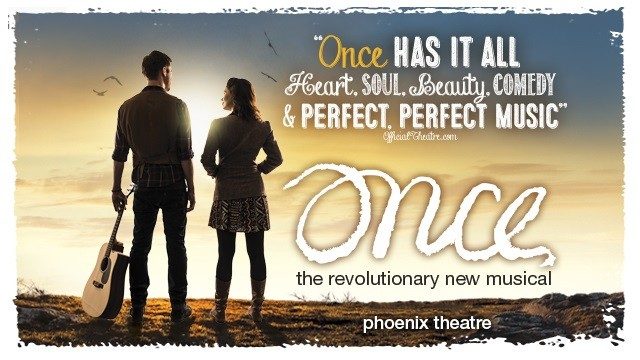 A bittersweet and funny love story that celebrates the power of music, performed live on stage by an extraordinary cast of actor-musicians, Once dazzles with invention, wit and unforgettable songs. Winner of 8 Tony® Awards, a 2013 Grammy® Award and the 2014 Olivier Award for Outstanding Achievement in Music, this is the show everyone wants to see more than once. Come and find out why…

And you can enjoy the Oscar-winning film, live on stage, with Once theatre breaks. The stage adaptation is proving very popular – especially for those celebrating a romantic occasion – hint hint!

This extraordinary, original and irresistibly joyous celebration of love, friendship and music has won a shed load of awards across the pond and will no doubt  woo Theatre Breaks audiences too with a supremely talented cast of actor-musicians who unleash all the giddy exhilaration of an Irish ceilidh live on stage.

When an Irish busker and a young Czech mother meet through a shared love of music, their song writing sparks a deep connection and a tender, longing romance that neither of them could have expected.

This unique stage adaptation takes you right to the heart of the action in a rapturous production that dazzles with invention. Once features all of the magical songs from the original film, including the Oscar-winning Falling Slowly. It is an achingly beautiful, thrillingly inspirational show that strikes a truly unforgettable chord.

Ronan Keating in Once

Casting : singer-songwriter and musician Ronan Keating stars to play the leading role of Guy. Irish recording artist Keating launched his career as a member of Boyzone in 1993 and has subsequently enjoyed a hugely successful career as a solo recording artist. With Boyzone Keating has sold over 25 million records worldwide and as a solo artist 20 million.

The Phoenix Theatre is on Charing Cross Road so the closest hotels are the 3 star St Giles Hotel and the 4 star Radisson Blu Edwardian Mercer Street. Other hotels include the Kenilworth and the Bloomsbury Street and the lovely Montague on the Gardens – all four star hotels and all excellent bases for a weekend break in London.

If you would rather stay out of the West End then the nearest tube station is Tottenham Court Road just a few minutes walk up the road under the Dominion Theatre.

Once Theatre Breaks are available to Saturday 21 March 2015