Well, for some of you it’s half term week with the kids around and wanting to “do stuff”. I’m in the same position and one of our holiday highlights was to see the production of The Woman in Black at the Fortune Theatre, London. Now I wouldn’t call this a family friendly fun filled couple of hours of theatre, but both my children are in there teens and enjoy a good ghost story plus it tied in nicely with the impending Halloween! Suffice to say that even on my 4th outing to see the play it was still just as spine-tinglingly brilliant as the first time.

Next month I have tickets to see Sunny Afternoon the Kinks inspired musical which, whilst still in previews, extended its run not once but twice and is now booking through to May 2015. Under the astute direction of Edward Hall (son of Sir Peter) – who also brought us the acclaimed Chariots of Fire two years ago – it is bound to be nominated many times when the award seasons comes around early next year.

Then on Boxing Day I’m going to keep the season’s festivities alive with a trip to see White Christmas starring one of my childhood idos Aled Jones and also Tom Chambers (Top Hat) who take over the roles made famous by Bing Crosby and Danny Kaye in the 1954 film of the same name. 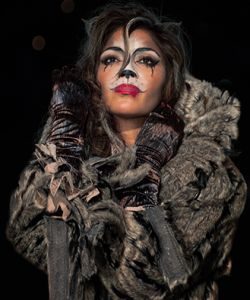 And finally, in February I will see Cats 33 years after first watching it in the West End. Then the tragic Grisabella was played by Elaine Paige who gave a searing performance of Memory which left the whole audience in tears, this time around former Pussycat Doll and X-Factor judge Nicole Scherzinger (pictured left) will don the furry coat and no doubt leave us as a lump of emotional jelly with her rendition.

And, looking way, way ahead to the summer I am very excited by the announcement of the new Regent’s Park Open Air Theatre season which culminates in a production of Lord of the Flies – this is definitely one “biro” onto the calendar. I cannot wait…

So, what’s on your theatrical calendar in the coming months?