Very pleased to hear that the Hampstead Theatre’s sell-out show Sunny Afternoon, which is transferring to the Harold Pinter theatre, next month as now been extended through to the New Year – even before its opened!

Sunny Afternoon is the smash-hit musical charting the rise to fame of Britain’s own The Kinks and it features their most memorable songs played and sung live on stage by the actors portraying the 60s group. 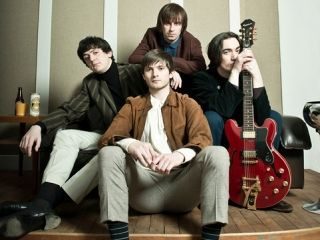 I have a personal interest in Sunny Afternoon not least because it has a great lead actor in the form of John Dalgleish (playing Kinks front-man Ray Davies) who has recently been seen on our tv screens as hapless summer camp counsellor, Barry, in C4’s Beaver Falls for two series as well as in Sky 1’s Starlings with Downton Abbey’s Brendan Coyne.

I am also pleased that an ex-drama school peer of mine, Edward Hall, is directing and another drama school classmate Vince Leigh is a cast member. And if that’s not enough to get me to buy a ticket, George Maquire, who plays band member Dave Davies, attended the Italia Conti Academy of Theatre Arts where I used to work (and in fact I acted as George’s agent whilst he was a student there). Oh, and finally, I think Helen Hobson, also in the cast, used to go to the drama school where I went – in fact, I think there’s even a Helen Hobson scholarship offered to promising students (not that I was awarded it, you understand).

Anyway, the fact that advance sales for this show has meant its already extended its booking period leads me to believe that its going to be brilliant (well, we know it was brilliant from the rave reviews it recieved at the Hampstead theatre).

Hopefully, like me, you will be seeing this show sooner rather later this side of Christmas.

Have a great theatre-going week