Theatre Breaks for Jeeves and Wooster in Perfect Nonsense are no longer available to book.

Enjoy this brand new play featuring PG Wodehouse’s best loved double act, Jeeves and Wooster, on a jolly jaunt to the countryside that takes a rather unforeseen turn for the worse!

Lance is a regular on our television screens having appeared in series such as comedies Spaced, Smack the Pony and  I Am Alan Partridge as well as playing the role of Matt in 2 series of the comedy drama Teachers.

Sinclair will always be remembered for his iconic role in 1981 coming of age film Gregory’s Girl.  Since then he’s kept himself busy contributing to Scotland’s 1982 World Cup song We Have a Dream which got to No 5 in the UK charts; a couple of turns on the West End stage in the 1994 musical She Loves Me for which he won an Olivier Award and also in the recent revival of The Producers; he’s written a novel; appeared in many TV and radio programmes; made a film with Brad Pitt (2013’s World War Z)  and has toured the UK and had another stint in the West End last year in Sean Foley’s The Ladykillers. I guess you can’t keep a great actor down!

So do you want to hear a bit about what the play is about? Well it is perfect nonsense really! Bertie heads to the country to find his host’s daughter, Madeline Bassett is rather head over heals in love with poor old Gussie Fink-Nottle. But life is never simple and if Bertie, with the help of the ever-dependable Jeeves, can’t bring them together he may well have to marry her himself: what a ghastly thought! 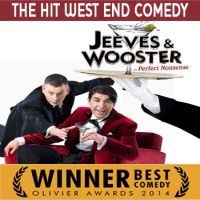 Jeeves and Wooster- Perfect Nonsense theatre breaks always come with tickets and hotel accommodation, although you can choose to add on rail travel, or a wide range of top London attractions to make your break even more spiffing!

When looking for nearby hotels consider the Radisson Blu Edwardian Leicester Square ( a five minute walk to the theatre) or the elegant 4 star deluxe Kingsway Hall on the other side of Covent Garden. For a rather swish five star break do check the Waldorf Hilton but if you are watching the pennies then the 3 star St Giles on the north side of Oxford Street or even the centrally located Covent Garden Travelodge may fit the bill. However, do consider the Bedford Hotel in leafy Russell Square too, which has just been done up and looks the bees knees (for a three star) and is a very reasonable price!

If you haven't seen Jeeves & Wooster in 'Perfect Nonsense', you must. It's excellent! Thank you for the recommendation