It’s been a long time and I didn’t realise just how much time had passed since my last blog until a colleague pointed out that it’s coming up for a month! Sorry about that, I’ve been busy reading up on all the new shows opening in the West End this Spring including one that I’m seeing next week … The Full Monty.

Those of you of a certain age will know this was an immensely successful British film back in 1997 starring Robert Carlyle, Mark Addy, Tom Wilkinson, Hugo Speer and Lesley Sharp – all who have had hugely successful careers since then.

It also catapulted its screen-writer Simon Beaufoy to Hollywood where he has since penned screenplays for Slumdog Millionaire (for which he won both a Golden Globe Award & Oscar), 127 Hours, Salmon Fishing in the Yemen and The Hunger Games : Catching Fire.

Mr Beaufoy has now adapted his own screenplay for the stage and The Full Monty played to packed theatres around the UK during 2013 with the final destination being the Noel Coward theatre in London where it opened last week to rave reviews. It will play for a limited season until June.

And I’m off to see it next Wednesday! 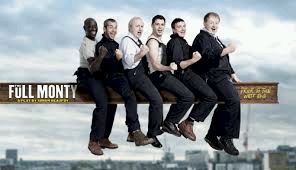 The story focusses on the lives of 6 unemployed Sheffield men who dance their way out of the dole queue and into the city’s strip clubs giving the ladies exactly what they want – The Fully Monty.

Having enjoyed the film in my “youth” I’m looking forward to seeing the stage version (not to be confused with the ill-fated American musical of the same name that died a death in the West End back in 2000).  I shall reveal what I thought of it (and if they really do go “the full monty”) in my next blog.

Until then – Have a great rest of the week