Where oh where has the time gone? I take one day off this week and suddenly we’re on Friday-Eve! What’s that all about then? 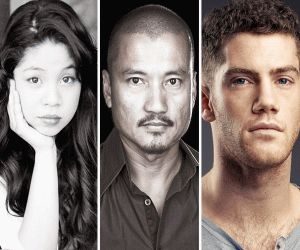 Eva Noblezada, Jon Jon Briones & Alistair Brammar will star in Miss Saigon when it opens at the Prince Edward theatre, London in 2014

I like the fact that producers of Miss Saigon are sticking to what they know best by casting a complete unknown actress into the lead role of Kim. They did this first time around when they held open casting in the Philippines and secured the acting talents of Lea Salonga (and Monique Wilson as alternate Kim) both who have continued their musical theatre careers with great success. In 2014 audiences will be introduced to American teenager Eva Noblezada and having just listened to a bit of her audition tape I can honestly say she will not disappoint. She is joined on stage by an international cast of actors including hugely successful double-platinum Philippine recording artist Rachelle Ann Go as Gigi, compatriot, Jon Jon Briones as the Engineer – a part he has played many times before and Australian Tamsin Carroll as Ellen.

A young British actor, Alistair Brammar, will play the pivotol role of Chris and Hugh Maynard will reprise his role as Chris’ best friend John. Alistair can currently be seen as Billy in War Horse at the New London theatre. He has also appeared as Marius in Les Miserables at the Queens theatre and was cast as one of the rebelling students in the 2012 film version. Hugh was recently seen on the X-Factor fronting his group Tenors of Rock who made it into Gary Barlow’s final six only to lose their place at the enth hour to girl group Stop Look Listen.

All of the above mentioned can certainly hold their own when it comes to singing and the show will undoubtedly be another huge success second time around!

You may get the impression that I’m very excited by the prospect of Miss Saigon returning to the West End. You would be spot on. It’s my all time favourite musical and I’ve already got my tickets for July. What about you?