Home > Archive > Much Ado About Nothing

Shakespeare’s Much Ado About Nothing was on at The Old Vic Theatre starring James Earl Jones and Vanessa Redgrave as Beatrice and Benedick. It was only on until 16th November 2013. 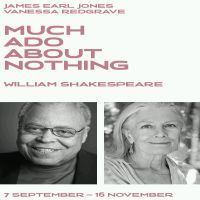 Directed by Mark Rylance and produced in association with Nicolas Kent, the show has been a huge success and a popular version of this famous Shakespearean comedy with Jones and Redgrave being much older than the usual actors who play the roles.

After falling in love, Claudio and Hero plan to get married. Despite their happiness, the Prince sets out to sabotage their nuptials in the form of a rather compromising case of mistaken identity. Meanwhile, marriage seems inconceivable for reluctant lovers Beatrice and Benedick (Redgrave and Jones), who share a love of hatred. The others plot to make them fall in love by a comical process of misunderstandings, but will their plan work?

Much Ado About Nothing performances to 16 November 2013

Evenings: Monday to Saturday at 19:30

Matinees: Wednesday and Saturday at 14:30

Much Ado About Nothing Theatre Breaks

Much Ado About Nothing Theatre Breaks include a ticket to see the play and overnight accommodation. Our range of hotels include 2, 3, 4 and 5 star hotels and cover most of central London.

Most packages are on a bed and breakfast basis but there are options just for the overnight accommodation.

If you do not want to drive to London our breaks also include optional discounted rail travel which can be added one the ticket and accommodation has been chosen.

You can also add entry to other London attrcations to make your trip even more memorable.