The political comedy The Duck House came to the Vaudeville Theatre in 2014 and guests on our The Duck House Theatre breaks enjoyed seeing Ben Miller from BBC1’s Death in Paradise and The Armstrong and Millar show play an MP who is just about to get his come-uppance in the middle of the expenses scandal! 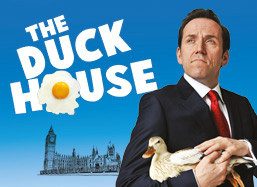 The Duck House Theatre Break are no longer available

It’s Spring 2009 and Gordon Brown’s Labour Government is in meltdown. With the General Election just round the corner, Miller’s character is in a tricky situation: suddenly finding himself and his secretarial staff (otherwise known as his wife Felicity, his student son Seb and Russian housekeeper Ludmilla) in big, big trouble.

If you love Mock the Week, Have I Got News for You and Private Eye, then you are bound to like this new political satire from two writers who’ve been making fun of MPs for years: Dan Patterson and Colin Swash.

The Duck House is on at the Vaudeville Theatre on the Strand with two favourite Theatre Break hotels very close by: the 3 star Strand Palace Hotel and the lovely 4 star deluxe Guoman Charing Cross. Just round the corner there is also the ultra trendy 5 star ME London hotel with its uniquely named rooms and its cool bars and restaurants.