Home > Archive > Strangers on a Train

Two strangers. One conversation. The perfect murder. Based on the same book as Hitchcock’s classic movie, Craig Warner’s play Strangers on A Train, comes to the Gielgud Theatre this November for a perfectly thrilling theatre break. 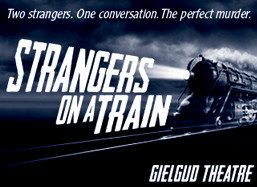 A seemingly innocent conversation soon turns into a nightmarish and dangerous reality for Guy Haines when he meets Charles Bruno on a train journey.  Ahead lies a lethal nightmare of blackmail and psychological torment that threatens to cost Guy his career, his marriage and his sanity. His choice: to kill, or to be framed for a murder he didn’t commit.

Get on board for the Theatreland’s most gripping new theatre break, as  Strangers on a Train opens in London on 2nd November to 20 February 2014.

Book your Theatre Break now for a magnificent journey of suspense you won’t want to miss.

Strangers on a Train and Hotel Accommodation

The Gielgud Theatre is on Shaftesbury Avenue, at the Piccadilly Circus end. Nearby hotels include the 5 star Le Meridien, the 4 star Radisson Edwardian Leicester Square and the 3 star Thistle Hotel.

Piccadilly Circus is the nearest tube on the Piccadilly line so any hotels in Kings Cross, Bloomsbury, Mayfair, Kensington and Knightsbridge are in easy reach. The Piccadilly Line goes all the way out to Hearthrow so it could be a great theatre break for a stop-over!