Hope you are enjoying the start of September still with lots of sunshine and warmth in the UK air.

Before we’ve even got close to the end of 2013, I can already report on a couple of things happening in 2014…

Well, apart from the new shows opening, that is (eg. The Full Monty and Miss Saigon)…

In March next year we’ll wave a fond farewell to the hugely successful comedy One Man, Two Guv’nors which may well leave the West End to go back on a nationwide tour – we’ll keep you updated on that. But just in case it doesn’t tour, I urge you to book to see it at the Theatre Royal Haymarket in London – you will not be disappointed. 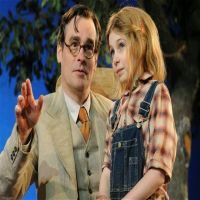 And as well as Miss Saigon making a welcome return to to the West End in 2014, one of this summer’s great successes To Kill A Mockingbird which was performed at the Open Air Theatre Regent’s Park has already been confirmed to return to the same venue next summer. If you didn’t manage to see it in 2013, again, I very much urge you to book for next year’s production. I took my 2 boys, aged 12 & 13, and they were mesmorised by it – I cannot praise it enough! Tickets go on sale 9th September.