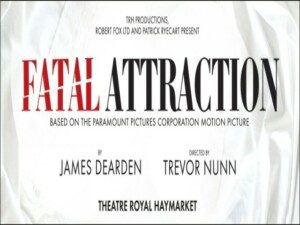 The classic movie thriller is dramatically re-interpreted for the stage by original screenwriter James Dearden, in a compelling production directed by Trevor Nunn that features an all-star cast including Natasha McElhone, Mark Bazeley and Sex and the City’s Kristin Davis.This whip-taut tale of obsession and revenge tracks the consequences of a casual encounter in a bar that quickly becomes a living nightmare for successful New York lawyer Dan Gallagher.

After spending a single weekend with his attractive pickup Alex Forrest, Dan assumes he can just walk away. But the dangerously unstable Alex won’t be pushed aside, and pursues a campaign against Dan and his family that is bound inexorably toward disaster.