If you don’t believe me when I say The Curious Incident of the Dog in the Night-time is a brilliant play, then perhaps you will take note of the fact that it picked up 7 prestigious Oliver Awards in last night’s ceremony held at the Royal Opera House in London.

28 year old actor Luke Treadaway won Best Actor for his remarkably performance as an autistic teenager and Nicola Walker won Best Supporting Actress for the role as his estranged mother. It also won gongs from Best New Play and Best Director in Marianne Elliott plus 3 technical awards all well deserved.

Another “Elliott” – albeit with a slightly different spelling – that won was the long-running musical Billy Elliot which picked up the BBC Radio 2 Audience award and afterwards members of the cast performed “Electricity” in the open air stage set up in Covent Garden Piazza. Also, good news for actor Killian Donnelly who currently plays Billy’s brother in the show, as he has just clinched the role of Deko in the new production of The Commitments musical which opens at the Palace theatre in September. 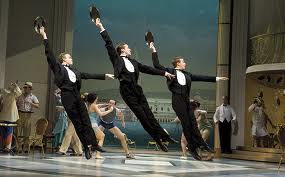 The other big winner with 3 awards (there was a lot of room for anyone else once Curious Incident had nabbed every other award going!) was Top Hat at the Aldwych theatre. It deservedly won Best Musical, Best Choreography and Best Costume.

Have a great Monday – enjoy the sunshine if you have it!