There’s been a big buzz in theatreland about the re-vamped version of Spice Girls inspired musical Viva Forever which is currently playing at the Piccadilly theatre.

When it first opened, reviews were a bit mixed with most critics finding something wrong with it. I must admit I was in that category and I really was desperate to like it because I love the Spice Girls music! 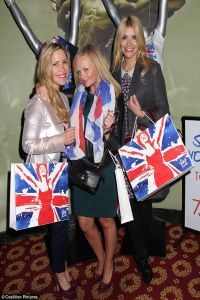 However, last week the stars turned out in force for the new look ‘revived Viva’ and by all accounts it was enjoyed all round. Comedian Katy Brand even writing a half page rave review of it for The Daily Telegraph newspaper.  Talk show host Graham Norton was also spotted in the audience and gave the show a big thumbs up. As were these three lovely ladies (left).

Theatrebreaks are lucky enough to have been given a second chance to see Viva Forever! so were off to the Piccadilly on Thursday night to see if it really has improved (although some of our staff actually quite liked it first time around – just me then?)

I will reveal all next Monday morning!