Home > Archive > The Ladykillers in London 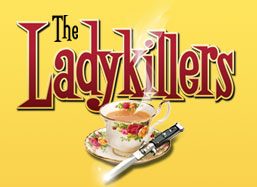 The Ladykillers Theatre breaks are no longer available. Check the Vaudeville Theatre page to find out what is now showing.

The Ladykillers is a classic Ealing comedy. Posing as amateur musicians, Professor Marcus and his gang of criminals rent rooms in the lopsided house of sweet but strict Mrs Wilberforce, to plan and carry out a daring heist. Plotting to involve Mrs Wilberforce, unwittingly, in their brilliantly conceived raid, they leave the police stumped! But Mrs Wilberforce becomes wise to their ruse and The Ladykillers conclude that there is only one way to keep the old lady quiet! With only her parrot, General Gordon, to help her, Mrs W. is alone with five desperate men. But who will be forced to face the music in The Ladykillers?

The Ladykillers and Hotel Packages

Book Your The Ladykillers Theatre Break today! – You can even add rail travel to your package, saving even more time and money! The comedy is on at the Vaudeville Theatre in The Strand, so the Strand Palace hotel is a perfect location to stay the night, otherwise Charing Cross, Embankment a nd Covent Garden are the closest tube stations if you would prefer to stay outside of theatreland… there are some good hotels across the river too – slightly cheaper and they give you the excuse to walk across Waterloo Bridge at night: what a beautiful view!

Laughed ourselves silly over "The Ladykillers" last night. Highly recommended.

What a fantastic production, a joy from the opening seconds until the very end, I really cannot recommend it enough.

The cast seemed to be having a great time and were fautless to a man.

I especially liked, 'One Round' who seemed so vulnerable and out of his depth until he showed both hidden talent and a more violent side. He was played beautifully by Clive Rowe whom I would certainly look out for again.

The play was full of surprises due to clever set design with moving tables, cars climbing walls, trains rushing through tunnels you never knew what was coming next.

The plot was full of twists and wickedly funny with the delicious Marcia Warren seemingly oblivious to everything going on around her.

I hope that if it really does have to finsish in April that we will soon see its return as it really is too good to miss.