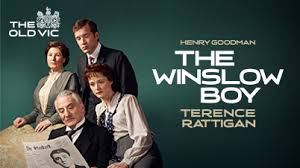 Henry Goodman stars in  Terence Rattigan’s drama, The Winslow Boy, based on a true story of a father’s fight to clear his son’s name.

When Ronnie Winslow is accused of stealing a postal order by the naval academy at Osborne that he attends, his father is asked to withdraw him. But certain of his son’s innocense and afraid of the stain it will leave on is family’s good name, his father sets about fighting the decision – a course of action that will bring him up against the combined forces of the government and the Admiralty.

But will the outcome be worth the cost that every member of his family will ultimately be asked to pay – his suffregette sister’s engagement? The education and future job of his universtity-bound brother and his father’s health?

At the time the case bacame a national cause celebre but the theme of personal conscience set against an establishment forced to defend itself in the glare of the media spotlight makes The Winslow Boy is as relevant today as it was when the play was the highlight of the first theatre and hotel packages in 1946!

Lindsay Posner directs award-winning actor Henry Goodman who has starred in both musicals and straight drama all over London’s West End from Billy Flynn in Chicago and Tevye in Fiddler on ythe Roof to Shylock in The Merchant of Venice ( wor wich he won the Olivier Award for Best Actor in 2000. He most recently played Sir Humphrey Appleby in  Yes, Prime Minister at teh Gielgud Theatre in the West End.

The Winslow Boy and Hotels in London

The Winslow Boy is on at the Old Vic on the south side of the River Thames. So although it is easy to get to via Waterloo  tube and railway station, if you want to stay nearby then have a look at the 3 star Days Hotel Waterloo, the Novotel London City South of the lovely 5 star London Marriott Hotel County Hall just by the London Eye and opposite the Houses of Parliament.