Relatively Speaking comes to London in 2013 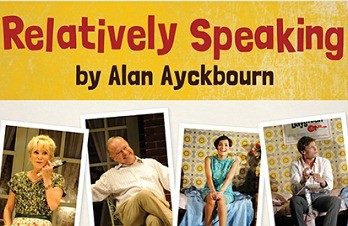 Relatively Speaking is Alan Ayckbourn’s classic comedy and it lit up summer 2013 with an all star cast including Felicity Kendal, Kara Tointon, Max Bennett and Jonathan Coy.

Check what is now on at the Wyndhams Theatre

Although Greg and Ginny only met a month ago, Greg has already made up his mind that she is “the one“.

When Ginny plans to visit her parents, Greg decides this is the perfect opportunity to ask her father for his daughter’s hand.

On finding a note with an address on it, he follows her to Buckinghamshire where he finds Philip and Sheila enjoying a quiet Sunday morning breakfast in the garden, but the only thing is – they’re not Ginny’s parents!

The Wyndhams Theatre is right in the heart of Theatreland, just above Leicetser Square. In fact, at quiet moments you can sometimes hear the trains underneath the theatre! Fortunately the laughter will drown out the noise when Relatively Speaking comes to town in May, but it does mean that it is really easy to both get to and from the theatre from anywhere in London.

So if you book a Relatively Speaking Theatre Break, whilst it is nice to have a nearby hotel like the Radisson Edwardian Leicester Square or the Strand Palace or the St Giles, most central London hotels are within 20 minutes of the theatre!

There are some great deals in Bayswater this summer and Bloomsbury is always lovely to stay in (and handy for Kings Cross and St Pancras if you are getting the train home the next morning). Alternatively look for a hotel in Kensington or Knightsbridge so you can enjoy a little shopping or museum-going when you are no at the theatre.