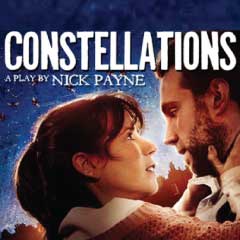 Starring two of British theatre’s most exciting actors, Rafe Spall and Sally Hawkins, Constellations, now at at the Duke of York’s Theatre is an explosive new play by Nick Payne about free will and friendship.

Constellations and Hotel Theatre Breaks in London are no longer available

If you are wanting to book a London theatre break for Constellations with hotel and ticket then you better book soon as the play is on for a stricly limited season – until 05 January 2013 in fact.

But there are some excellent deals at various hotels over the Christmas period with breaks including best seats, 3 star overnight accommodation and full English breakfast starting from £79.25 per person. But if you are looking at 4 star accommodation and it is important to be close by the theatre then try the Radisson Edwardian Kenilworth Hotel at £117.50pp

By the way,  the 5 star May Fair Hotel, the one that all the stars are always staying at, that is only £164.75 for the same package. Now that is a good deal if you wanted to be treated like a star for the night!

WARNING: Hang on to your hats, this could get complicated!

Constellations is a story of love, honey, and a quantum multiverse. It poses the question, “can everything you have and have not done exist in the same vortex of reality?”

Told you it could get sticky!

Rafe Spall  is a bee-keeper whose friendship and growing relationship with Sally Hawkins’ cosmology academic, is looked at through shards of infinite possibilities – combining quantum multiverse theory and the idea of free-will.

OK that is the scary bit, but Constellations is an elegant and playful play blending the mundane, the everyday, with the ethereal, the actual and the imaginable and the good news is that it is only 70 minutes long giving yu the rest of the evening to discuss what you have just seen!

So if you want your minsd opened to the possibility that every outcome may only be the first link in a chain of cosmic consequences then Constallations is the play for you!

Sally Hawkins has starred in Jane Eyre, Made in Dagenham and was a Golden Globe winner for Best Actress in Mike Leigh’s Happy-Go-Lucky.

Rafe Spall was last in London with the Donmar Warehouse’s ‘One Day When We Were Young’. On TV you’ll recognise him from Channel 4’s ‘Pete Versus Life’ and on the big screen he starred in Ridley Scott’s ‘Prometheus’ )
Please be aware that strobe lighting is used throughout the performance.