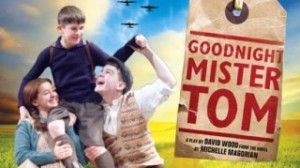 After playing to packed houses across the England Scotland and Wales, the critically acclaimed Chichester Festival Theatre production of Goodnight Mister Tom comes to London for a nine week run starting on 22 November 2012 and running through to 26 January 2013.

Michelle Magorian’s feel good story has become a modern classic and this production, adapted for stage by David Wood and celebrating the novels 30th anniversary, will inspire audiences anew.

William Beech is evacuated into rural England where he builds a remarkable friendship with an elderly recluse: Tom Oakley. However as they both settle into their new lives William is summoned back to London by his mother and we find that everything is not as perfect as it seems.

The novel won the Guardian Children’s Fiction Prize and was commended for the Carnegie Medal whilst the film starring John Thaw won a BAFTA award.

The production runs at the Phoenix Theatre on Charing Cross Road in London’s West End for 9 weeks.