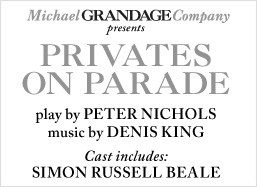 Written by Peter Nichols, the award-winning Privates on Parade ( Laurence Olivier Award for Best New Comedy in 1977) will fall in at the Noël Coward Theatre this winter, enetertaining the troops from 01 December 2012 to 02 March 2013.

The show joins the group as it welcomes its newest recruit: private Steven Flowers who must prove his manhood, without relying on his uniform.

Simon Russell Beale stars as Captain Dennis, leader of the troupe and star of the show: providing many memorable moments including his Marlene Dietrich, his Vera Lynn and his unforgetable Carmen Miranda!

Create your own review
Privates on Parade
Average rating:   4 reviews
The Times
by The Times

Time Out
by Time Out