Home > Archive > A Chorus of Disapproval

A Chorus of Disapproval cast 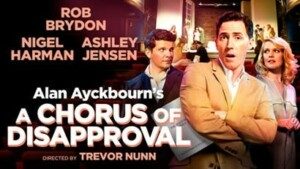 Rob Brydon is to star alongside Nigel Harman (Shrek, EastEnders) and Ashley Jensen (Extras, Ugly Betty) for his West End debut in Alan Ayckbourn’s riotous comedy A Chorus of Disapproval.

A Chorus Of Disapproval has opened at the Harold Pinter Theatre  and runs to 05 January 2013 – now that will make a good highlight to a pre-Christmas London shopping trip or a seasonal getaway!!

‘A BLISSFUL EVENING.  THE JOKES KEEP COMING.  ROB BRYDON IS MAGNIFICENT.’ The Times

‘Nigel Harman is in fine form, Ashley Jensen is beautifully caught and Rob Brydon is both funny and touching.’ The Telegraph

The comedy is based around the Pendon Amateur Light Operatic Society’s production of The Beggar’s Opera which is going rather badly… that is until a handsome but shy young widower Guy (Harman) joins the group.

An instant hit with the company’s ferociously zealous director Dafydd (Brydon) and the show’s leading ladies, including Dafydd’s wife Hannah (Jensen), Guy soon gets more than he bargained for as he discovers that all the best action happens off-stage.   Classic songs fill the air as the drama on stage is mirrored by the romantic rivalry and small town squabbles causing a stir in the wings of this ambitious local show.

Not seen in London since the National Theatre’s hit production over 25 years ago A Chorus of Disapproval is one of a plethora of great new shows opening in London this autumn.