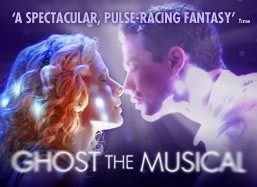 If you are looking for a little romance in your life the you can’t go far wrong with a short break to London with tickets to see Ghost the Musical.

And hurry the show will now close in London earlier than originally planned – the last performance at the Piccadilly Theatre will be on Saturday 6 October 2012.

Adapted from the film starring Demi Moore and Patrick Swayze,  Ghost – the Musical is a timeless fantasy about the power of love. Sam is trapped as a ghost between this world and the next trying to communicate with his girlfriend Molly through a phoney psychic in the hope of saving her from his murderer.

A roller-coaster ride of romance, drama and excitement, Ghost – the Musical has been adapted for the stage by Bruce Joel Rubin who, in 1991, won an Oscar® for Best Original Screenplay. The show features music and lyrics by music legends Dave Stewart (Eurythmics) and Glen Ballard (writer of Michael Jackson’s Man In The Mirror) whose combined album sales top 250 million. The score also features the unforgettable Unchained Melody.

Siobhan Dillon and Mark Evans star as Molly and Sam.

Siobhan Dillon found fame in the TV series How Do You Solve a Problem Like Maria? on BBC One in 2006. Since then she has starred in both Grease and Legally Blonde in London’s West End.

Mark Evans is best known to Theatre audiences as Fiyero in Wicked.

Stage effects are by Magic Circle member, Paul Kieve, illusionist for Harry Potter and the Prisoner of Azkaban and choreography is by Ashley Wallen, who has worked with Kylie Minogue, Black Eyed Peas and X Factor.

GHOST promises to be magical, so book your London Theatre Breaks night out and send your spirits soaring.

Check out other shows at London Theatre Breaks

“Ghost The Musical” is based on the 1990 film written by Bruce Joel Rubin. A fantasy drama based on two lovers Sam and Molly who set up house in Brooklyn. Happiness is marred by bank worker Sam discovering errors in the books of the bank at which he works. Before he has time to investigate the two of them are mugged and Sam is killed. As a disembodied ghost Sam searches for his attacker and the perpetrator of the bank fraud. Unlikely, far fetched, may be but hang on in and you quickly get swept up in some upbeat musical numbers and well written lyrics.

Sharon D Clarke is arguably the star of the show as the psychic Oda Mae Brown. She provides the humour and shows off her own not inconsiderable vocal prowess. This is not to belittle the outstanding performances of Sam and Molly (Richard Fleshman and Caissie Levy).

There are plenty of Stage effects and illusions to keep the pot boiling together with some fine choreography and dancing.

Altogether a fine entertainment with a capital G

We couldn’t begin to imagine how anyone would be able to reproduce all the special effects from the film onto the stage – but somehow the people behind the staging of Ghost the Musical exceeded expectations and brought pure magic and wizardry to the Piccadilly theatre! The story remained the same – and for those like me who love the film, seeing it acted out more or less word for word was great.

The casting of Mark Evans as Sam was perfect – he could sing and act – and was a believable character. Although Siobhann Dillon had a brilliant singing voice, she didn’t have the emotion or ‘edge’ that Demi Moore had brought to the screen.

But the star of the night had to be Sharon D Clarke as Ode Mae. A natural performer, singer, and actress with perfect comic timing – is she Whoopi Goldberg’s double?! As I overheard one audience member say on leaving the theatre “without her the show would have been just ok” – which I disagree with as the dancing and routines were slick, clever and different from anything I’ve ever seen.

The only criticism both me and my young (23 year old) companion had was that at times the singing was just too loud! In fact, we did wonder why it was a musical and not just a play – some of the songs were unnecessary – especially the slow slushy ones! We also felt it could easily have been set in London – thus avoiding the, at times, not so good American accents.

All in all a great show, highly recommended if you want to be amazed and wowed – and of course, a thriller and a love story to boot.

Love the review, especially your two points at the end: the idea of a play version set in London is brilliant - you should write it!

I had seen this in 1990 in the cinema and had a'wail' of a time.It is a heart gripping musical with beautifully sung songs.The 'special effects' had the audience gasping.Oda Mae Brown was hysterical and the final 10 minutes had me reaching for my hankie-all around me people were sniffing and wiping their eyes-even men!What a wonderful show!!!1

My 2011 Boxing Day treat was to see Ghost the Musical. I was a little sceptical about how it would transpose to stage, but also a little bit excited too. I was going with a friend whose all time fav film is Ghost, so I suppose some of her excitement was rubbing off on me.

Well, I can't believe it took me so long to get around to seeing this marvelous production.

And hasn't Richard Fleeshman grown up into a fine specimen of a young man? Who would have thought Corry's token Goth Craig Harris could turn out to be such a hunk!

Anyway, back to the show... the songs are fab, as well as the sets. Magical tricks are very clever (I have even worked with illusionist Paul Keive in The Witches - lovely bloke). People around me were suitable impressed with gasps of "how did they do that?"

The ending will have the romantics reaching for their tissues. The female family in front of us were blubbing heaps! And the standing ovation the cast recieved was enevitable.

Mark Evans takes over the role of Sam Wheat from 13th January and Siobhan Dillion (dubbed "second chance Maria" by Graham Norton in the inaugural BBC talent show) becomes his love Molly Jensen. Evans looks rugged enough to take on the sexy role of Sam and I think Siobhan Dillon stunningly beautiful (she was always my favourite aspiring Maria). Both should conjure up the right atmosphere and sympathy in this most tragic of love stories.