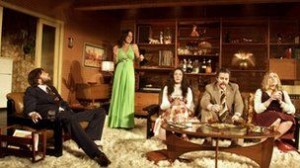 Mike Leigh’s classic play Abigail’s Party will replace The King’s Speech at the  Wyndham’s Theatre in London’s West End from 15 May.  The production stars Jill Halfpenny (EastEnders) as Beverly Moss – the “brutal hostess with shoulders like a lifeguard and a walk to match” – and comes from the Menier Theatre where it was in March of the year.
Book your Theatre Break NOW

The satire on the aspirations of the 1970s British middle class originally starred Alison Steadman as hostess from hell Beverly. Set at a suburban dinner party, which slowly unravels, Abigail’s Party was written by Mike Leigh for stage and screen in 1977 and is perhaps his best-known television work.

Other stand-out members of this small but perfectly formed cast include Joe Absolom who plays Tony, Natalie Casey is Angela and Susannah Harker plays Sue.

Theatre Breaks are now on sale  – look out for deals at the nearby Thistle Hotels – the Picadilly and the Trafalgar. Of course you could just round to the Savoy to stay the night!