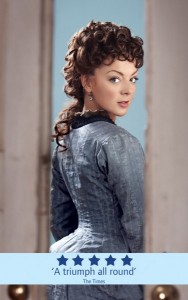 Played out over just 24 hours, Hedda is a thrilling portrayal of a free-spirited young woman played by Sheridan Smith (Two Pints of Lager, Legally Blonde-the musical) fighting convention who cuts through the lives of everyone in her orbit.

Director Anna Mackmin is delighted to be back at The Old Vic and here she explains why:

‘I’m honoured to be returning for a third show to this greatest of stages. And what a play to be working on! Ibsen’s radical and explosive classic has been beautifully translated by my hero, the brilliant Brian Friel. We are into rehearsals as I type and are delighted to be discovering how unexpectedly funny and potentially moving it can be. I’m blessed to be working with one of the great acting companies and we look forward to sharing our work with you soon.’

Brian Friel’s adaptation of this seminal work reveals a play as fresh and shocking as when it was originally written.