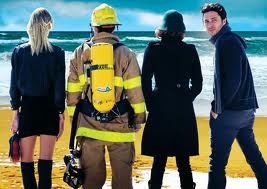 Written by and starring Zack Braff of Scrubs fame, All New People at the Duke Of York’s, London has now closed and The Judas Kiss, starring Rupert Everett, is now at the Duke of York’s Theatre

Charlie (played by Zach Braff), has hit rock bottom. In an attempt to escape from the rest of the world he ends up on Long Beach Island, New Jersey in the dead of winter.

His perfect escape is interrupted by a motley parade of misfits who show up and change his plans.

A hired beauty, a fireman and an eccentric British estate agent  desperately trying to stay in the country, all suddenly find themselves tangled together in a beach house where the mood is anything but sunny.

It premiered at New York’s Second Stage Theatre garnering plaudits and ovations. Before it comes to London for a 10 week run it will first play a week in both Manchester and Glasgow.

“A morbidly funny play about being young, adorable & miserable” Variety