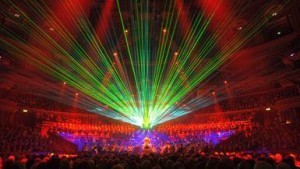 In November, Classical Spectacular returns to London and the Royal Albert Hall. With highlights from some of the most popular classical pieces ever written, played and sung by a host of classical stars from all corners of the classical world, it promises to be an evening of superb music.

Our Classical Spectacular Breaks for 2013 will be announced soon

And unlike many other classical concerts, which tend to be quite static affairs, Classical Spectacular producer, Raymond Gubbay, will create a feast for the eyes as well as the ears: with a dazzling light show, can can dancers, thundering cannons and an indoor fireworks display.

As well as eternal favourites such as Nessun Dorma, Rule, Britannia! Land of Hope and Glory and the 1812 Overture, the programme will include the Saint–Saens Dying Swan, Barber Adagio For Strings and Haydn Trumpet Concerto Final Movement.

Providing this world class entertainments are teenage trumpet sensation Melissa Venema, the vocal chords of baritone Simon Thorpe and tenor Jonathan Stoughton, the Royal Philharmonic Orchestra, the Band Of The Welsh Guards AND the Muskets And Cannons Of The Moscow Militia

We have hotel packages including tickets for Classical Spectacular for evening performances in the Stalls or upper Circle.

Prices start from £85 per person including ticket, overnight accommodation, breakfast service and VAT at 20%

See Also Our Opera Breaks at the Royal Opera House