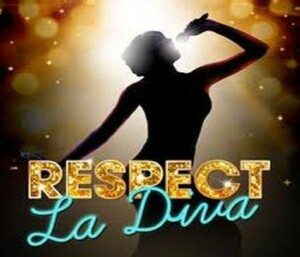 “Musical Revue” is not a phrase you see on the London theatre scene very often nowdays. I guess it got a bad name at some stage when some cheap old toot came out in a desparate attempt to employ some flagging old musical stars and fill a couple of run down theatres back in the day!

But that was a long time ago! So it is good to see RESPECT La Diva using it again: bravely standing up for that great theatrical tradition of “revue”! And clearly not trying to be something it isn’t – ie something with a storyline!

Maybe it is the resurgence of Burlesque – which is basicaly revue with less clothes – that gives RESPECT La Diva the confidence to use the term. And it does involve clothes so a “musical revue” seems to be the perfect description of this musical celebration paying tribute to some of the greatest female singers of all-time.

Featuring the talents of Sheila Ferguson (herself no slouch as one of the Three Degrees), Denise Pearson (Five Star), Katy Setterfield (The One & Only) & Zoe Birkett (Pop Idol) and a cast of West End singers and dancers with a stunning live band, RESPECT La Diva is packed with over 30 classic songs by diva greats including Aretha Franklin, Beyoncé,  Diana Ross, Dusty Springfield, Etta James, Mariah Carey,  Shirley Bassey, TinaTurner, Whitney Houston & many more.

The show is hosted by X-Factor finalist Andy Abraham.

Respect La Diva is a supporter of the charity Refuge and during the show there will feature some moving monologues in support of the charity.