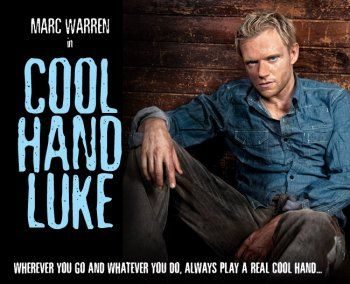 I can remember the first time I saw Cool Hand Luke on the telly, then I read the book  – WOW – Yeah Stick it to “The Man”. But could anyone carry off that role on stage night after night?  Yes, I think Marc Warren probably can – if anyone can!

So here at Theatre Breaks we were very excited that Cool Hand Luke came to the Aldwych Theatre in London when it opened on 23 September 2011 – what a difference from Dirty Dancing!

For those of you who haven’t seen the movie or read the book, the official blurb goes like this

A charismatic rebel, who will always get back up after a beating: a man who won’t conform no matter what it costs. Paul Newman, at his most enigmatic (behind that smile), played him in the film.

So, here in London, in a powerful new adaptation for the stage by Emma Reeves, based on Donn Pearce’s acclaimed novel, and directed by Andrew Loudon, Cool Hand Luke is the raw and uncompromising tale of sticking it to “The Man”.

Cool Hand Luke is at the Aldych Theatre, London so closest tube station is Covent Garden. If you want to stay the night and book a London Theatre Break then the 4 star Kingsway Hall Hotel or the 3 star Strand Palace are great bases.

What with the return of Jerusalem, the opening of Driving Miss Daisy and this mighty production following on from the hits of the summer – Butley, Betrayal, Pygmalion, One Man and Two Guvnors – 2011 seems to be turning out to be a bit of a purple patch for the West End.

Cool Hand Luke Theatre Breaks at the Aldwych Theatre, 49 Aldwych, London starting from 23 September 2011 will now finish on 19 November after only 67 performances – get in quick!