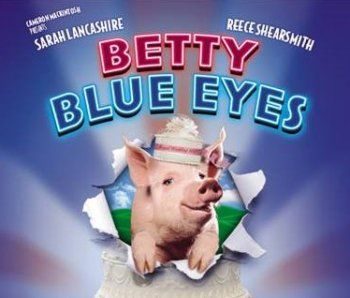 I think my favourite quote about Betty Blue Eyes is the one that goes “I never thought I would enjoy a musical about a pig and a royal wedding so much” like somebody actually considered the possibility before it came in to being!

For those of us who were not expecting such a production, maybe we should start to consider how much we would enjoy such a production – especially when it stars Sarah Lancashire and Reece Shearsmith – because those who have been have certainly enjoyed themselves!

Of course the whole premise of the musical Betty Blue Eyes is perfectly timed! Set in 1947 – it’s Austerity Britain, belts are being tightened, fair shares for all, the coldest winter in decades and a royal wedding. You see, if our folks could survive it then surely we can!

Of course it isn’t completely new. Adapted from Alan Bennett and Malcolm Mowbray’s hilarious comic film ‘A Private Function’ I think it starred Michael Palin; it is a curly tale that centres around Betty, an adorable pig who is being illegally reared to ensure that the local dignitaries can celebrate the forthcoming Royal Wedding with a lavish banquet while everyone else makes do with Spam.

This utterly British musical is full of eccentric characters and, of course, Betty herself.