Aida at the Royal Albert Hall

Theatre Breaks are very excited to announce our hotel and theatre packages featuring Verdi’s Aida at the Royal Albert Hall in February and March 2012. 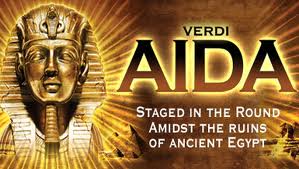 Aida at the Royal Albert Hall 2012

Of all the grand operas, Joe Green’s tale of love and death in the pyramids is one of my favourites. From the pomp and ceremony of the entry of the captured Ethiopian army to the intimacy of the final scene: from the grand march to the fateful stone, this was written to be performed at the Royal Albert Hall – I can almost feel the atmosphere as I type! Presented by the great producer Raymond Gubbay this promises to be a truly spectacular occassion.

We are lucky enough to have Clare Rutter to sing Aida. If you ransack Youtube you will find several clips of her performing the role for the English National Opera back in 2007.

Her Radames on this occasion is Joseph Wolverton who will be performing the role for the first time. But don’t worry, the Amici di Verdi Society invited him to perform a recital at the Salone di Barezzi in Busseto, Italy so I think he’ll be OK!

Aida is sung in Italian with English surtitles but I find it is always best to buy a programme to check out the story first then you are not for-ever having to squint at the writing when you should be taking in the cozzies, the set, the lighting, the mood and the music.

We have theatre breaks including tickets for Aida for weekend performances – the Fridays and Saturdays 24, 25 February, 2, 3 and 9, 10 March 2012 although the March dates are not up yet – hopefully should be by the end of the week.

For all dates (when they are up) we have tickets either in the Stalls or the Circle. The Stalls are the posh seats, the circle are the cheap and cheerful… to give you an idea: breaks including 3* accommodation and stalls seats start at £135 per person where as cheap and cheerful breaks start at £91 per person. Now that is a good deal!

So make your choice here and off you go.

Before you head off, just a word about the hotels. As I said, breaks start at just a smidge over £90 per person including tickets and accommodation. Close by there are a couple of 3 star hotels across the park in Bayswater or there is the City Continental London Kensington, however only the self catering Hyde Park Studios and Apartments in Bayswater comes out of TripAdvisor doing well! Having said that the rest are cheap and mainly only grumpy people write to TripAdvisor, so what do you expect.

However I would spend an extra £27 per person and upgrade to the 4 star Kensington Close Hotel. Recently refurbished, a lovely pool and leisure facilities and close to the Royal Albert Hall it is a great choice. There is of course the Radisson Edwardian New Providence Wharf which is a lovely hotel and cheap as chips at just over £100 with circle seats but you may as well stay in Cairo it is that far from the Royal Albert Hall!