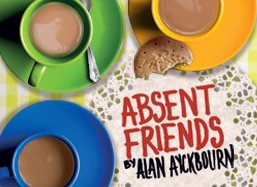 All About Absent Friends

Another tried and tested comedy returns to London theatre, and the newly renamed Harold Pinter Theatre in particular,  in the form of Alan Ayckbourn’s darkly comic Absent Friends. The last time you could enjoy an Absent Friends Theatre Break in London’s West End was 1976 when it was directed by Magic Roundabout narrator Eric Thompson! I’m full of useless bits of information today!

I’ll come on to the story in a moment but first it is probably worthwhile highlighting the cast. From the worlds of stage, TV and film is assembled a rather cracking bunch. Under the stewardship of director Jeremy Herrin,  Reece Shearsmith (The League of Gentlemen), Kara Tointon (Pygmalion, EastEnders, Strictly Come Dancing Winner 2010), Steffan Rhodri (Gavin and Stacey),  David Armand (The Armstrong and Miller Show), Elizabeth Berrington (In Bruges, Waterloo Road) and Katherine Parkinson (The IT Crowd, Season’s Greetings) combine to give London a rather stellar cast: even if Ayckbourn’s comedy wasn’t worth a visit on its own – I’d probably go an see that lot if they were just having a drink down the pub!

Well not a synopsis, because that would ruin everything, but a brief idea of what to expect.

Colin, unbeknownst to his friends, is actually rather happy living with just the memory of his recently departed fiancee! However Diana, the wife of one of Colin’s old friends, decides to host a dinner party in a mis-guided attempt to cheer him up.

Unfortunately the group she has assembled is not capable of cheering anyone up, in fact she would have struggled to put together a less cheerful bunch!

Alan Ayckbourn does a wonderful job of pushing each character to the very apogee of happiness – in stark contrast to the rather un-nervingly happy Colin.

Absent Friends is on at the Harold Pinter Theatre (formely the Comedy Theatrer) in Panton Street, just off the south-west corner of Leceiester Square.

Because you are right in the middle of the West End there are no really cheap offerings nearby, but because the nearest Tube stations are Piccadilly Circus and Leicester Square you do get easy access from all over London on the Piccadilly and Northern Lines.

Two Radisson Edwardian hotels, the 5 star Hampshire and the 4 star Leicester Square offer excellent accommodation nearby. Usually a little cheaper are the equally handy Thistle Trafalgar Square and Thistle Piccadilly and just the other side of Piccadilly Circus is Le Meridien and also The Ritz if you are really feeling flush.

Use the booking box adjacent for some great deals or, for a wider selection of hotels book at http://bookings.theatrebreaks.co.uk/Theatre/absent_friends_comedy-332.htm